How Election Day Angst Triggers Us 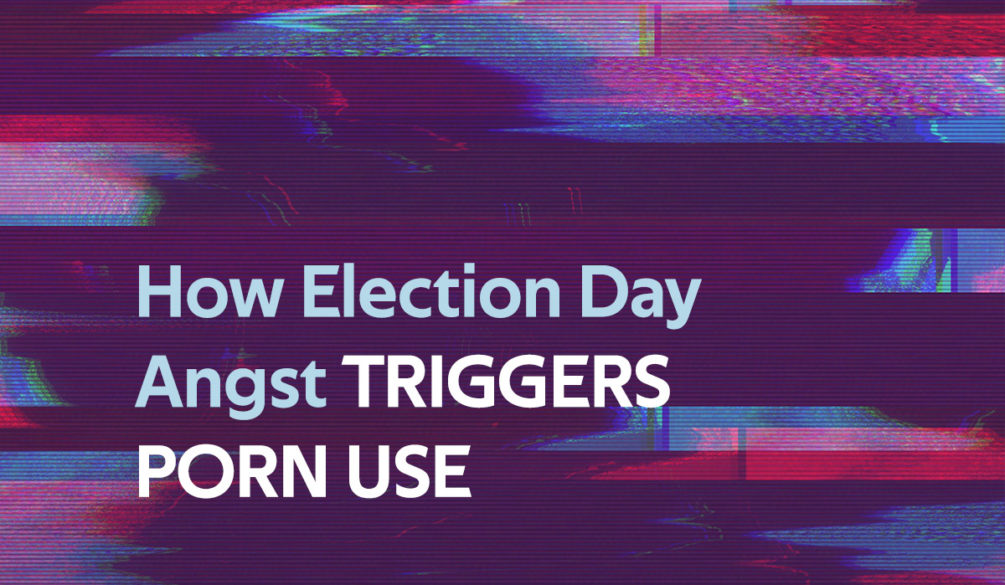 Whether an article by CNN, Fox News, or a cantankerous post against “the other side” from a friend or colleague, there is no shortage of inflammatory election information. We are a nation in deep division and steeped in contemptuous vitriol. No matter who you are voting for (or if you are part of the 35-60 percent of eligible voters who don’t vote in any given election), you may have found yourself resigned to the belief that no matter who wins, we all lose.

Insights From The 2016 Election 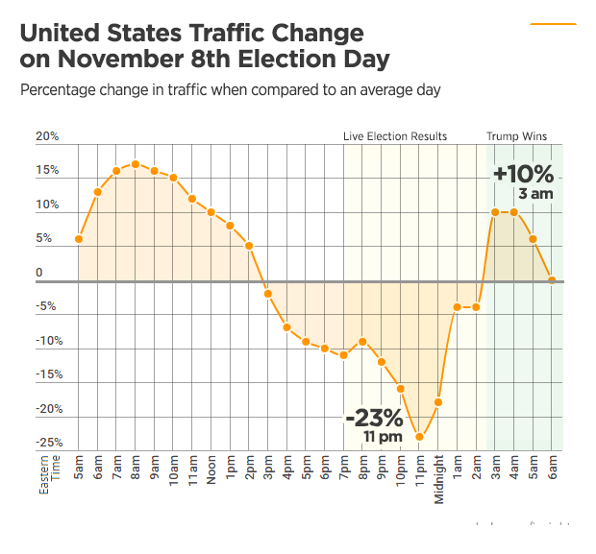 The Foundation of Our Trust

This article will explore how pornography exploits our anxiety, feeds on our disappointment, and exposes our false hopes. This election season will give us the opportunity to face our individual and national problems and elect whether or not to take greater responsibility for the words and actions we choose.

If porn data from American history is any teacher, pornography use will begin increasing during the early morning hours of Tuesday, November 3rd 2020 and then gradually fall as we get closer to the final results. The morning of the election, anxiety will intensify, and we will turn to behaviors that give us the opportunity to reestablish control. 2020 has been a year (or has it been a decade?) of seismic shifts in the foundations of our life and many of us are hoping that our candidate will bring some stability to the collective madness of this year. Worse, this year we are unlikely to know the final results of the election for days (or weeks) to come, sustaining a protracted season of anxiety beyond election day.

We often think about anxiety as a troubling condition within our mind. In reality, anxiety resides far more within our bodies. In fact, the vagus nerve pathway transmits data at a 10:1 ratio from our body up to our brain versus our brain down to our body. Therefore, rather than trying to think or distract our way out of anxiety, we can view anxiety as a signal inviting us to a more embodied life. While most people focus on trying to reduce their anxiety through mental strategies, the more effective approach is to teach your body how to tolerate times in life that are inevitably stressful (practical examples at the end of the article). Anxiety is not your enemy, it is an invitation to kindness and connection.

After Hillary Clinton conceded the election, women increased their involvement in pornography 10% above normal levels while most men stuck around to watch Donald Trump’s acceptance speech. What we can tell from the election results was that women were anywhere between 12-13 percentage points more likely than men to have voted for Hillary Clinton (54% among women, 41% among men).

Hillary Clinton announced that her election night event would be held at the Javits Convention Center in Manhattan. The venue is built with glass, from top to bottom. One twitter user posted, “The place where Hillary will figuratively shatter the glass ceiling will literally have a glass ceiling.” As you can tell from the language of this post, many women (and men) were certain Senator Clinton would win and experienced a profound sorrow when she lost. Sorrow has to go somewhere and the way many women seemed to metabolize their anger and heartache was through pornography.

With many allegations of sexual assault against women from the 2016 Republican nominee for president, it’s a fair to assume that many women felt so much loss, amplified by the belief that so little would actually change within the glass ceilings of their lives. In the last 4 years President Trump’s ratings with women have continued to weaken and some believe it could cost him this election. With polls showing an even greater percentage of women voting for Joe Biden this year, a President Trump reelection would spell great disappointment for the majority of women across the country.

In facing and anticipating disappointment, we need connection. Sadly, so many of us opt for isolation. No matter who you vote for in 2020, you’ll likely experience some degree of loss. For some, that loss will be associated with your candidate’s defeat. For all of us, it will be the grief of how much civil and political ugliness took place on the journey to (and out of) this year’s election. So on the evening of November 3rd and the days and weeks that follow, the question we would benefit from asking is how can we pursue connection rather than vitriol and isolation in the midst of our grief or celebration? In isolation, we increase the probability of pursuing a pornographic world that leaves us even more severed.

If you do find yourself particularly disappointed this election season, consider the following: 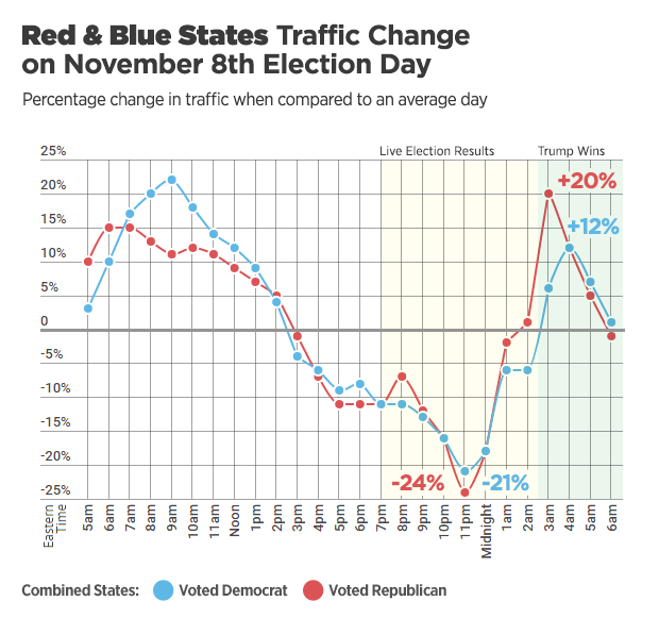 How Hope Can Lead to Pain

There is an ancient Jewish proverb thatsays, “Hope deferred makes the heart sick…” The reason is that we are hope-based beings. Hope is like a beachball that you try to suppress under water. You can exert a lot of energy trying to keep it down, but it’s eventually going to rise to the surface because (in this case) buoyancy beats gravity. When the gravity of disappointment pushes our spirit down, something deep within us feels like we’ve been wronged. When our hope comes back void, we experience pain.

Each election cycle, our country puts its hope in a candidate or political party to conserve or progress American life. When the object (political party) of our hope is not elected, we feel a sickness of heart and find ourselves saying, “The United States will not conserve my desired way of life.” or “The United States will not progress in bringing liberty to those I believe most need it.” Whatever the outcome of the 2020 election may be, it is important to set an intention for how you will engage your pain and redirect your hope to that which an election cannot take away.

When We Hope in The Wrong Things

It is also possible to put too much hope in the wrong things. Whatever we place our hope in can eventually lead to disappointment because we expect the object of our hope to rescue us from misery or make our life complete. Depending on when you were alive in human history you might say, “If we could just appease the angry god, then we wouldn’t suffer so much.” Or “If I just get a good crop…”, or in 2020, “If the right president could just get elected or a vaccine got developed, then…” But of course, that hope never delivers the fulfillment we desire.When we put our hope in something more than it warrants or we make it an ultimate thing, we have made that hope into an idol.

Anytime we idolize something, we’ve outsourced our fulfillment to something that cannot deliver. By default, when our idol loses, we lose too. If we are honest, there are false hopes in nearly every realm of life. Examples include when we hope our romantic partner will help us feel better about ourself, but they end up being far more interested in having their needs met. It happens when we hope a certain salary or occupation will offer us satisfaction, but we end up having no time for the things that matter most. Or when we hope porn will reduce the pain of our loneliness, but it ends up intensifying it. In each of these examples, we lean on a false hope to escape the necessary crucibles that have the potential to mature us. Every false hope, no matter how legitimate it initially appears, is a construction of an idol.

When our hope proves to be insufficient, we enter a two-choice dilemma. Double down on what’s not working or abandon the idol in order to develop a more authentic hope. This election week will corner our nation with the agony of what it means to hope and will offer us the invitation to wean ourselves off of false, unfulfilling hopes. Hope at all and you might experience pain. Hope too small and you will feel duped by whatever it is you receive. Instead of putting your deepest hope in a political candidate, invest in a community that seeks to grow truth, justice, and beauty in your local context.

5 Things You Can Do This Election Week

1.To regulate and tolerate our anxiety, attune to your body. We can do that through pursuing activities that engage the senses such as walking in a peaceful setting, yoga, meditation, cooking a new recipe, singing, and prayer.

2. We can also use our mind to help tame our anxious bodies. Daniel Siegel, clinical professor of psychiatry at the UCLA School of Medicine sums this up with the simple and elegant phrase “name it to tame it.” When our thinking and rational brain (cortex) is able to accurately name what the emotional brain (limbic) is  feeling, there are soothing neurotransmitters that flow from our cortical brain into our limbic system. For example, when we say out loud, “I am anxious about the 2020 election and what that means for our country,” the naming of our inner world will begin the process of bringing regulation to our nervous system.

3.Talk to a friend or trusted guide (therapist or mentor) about some of the anxiety you’re harboring. Many therapists are now offering sessions online. Go to psychologytoday.com to see therapists in your area who can work with your insurance (if you have it).

5. Connect with neighbors to scheme for practical ways to create beauty and belonging on your street or in your neighborhood. You are often far more powerful than you are powerless.

Jay Stringer is a licensed mental health counselor and ordained minister. Jay’s award-winning book Unwanted was based on research on nearly 4,000 people struggling with unwanted sexual behaviors like the use of pornography, extra-marital affairs, and buying sex.

Stringer holds a Masters of Divinity and Masters in Counseling Psychology from the Seattle School of Theology and Psychology and received post-graduate training under Dr. Dan Allender while serving as a Senior Fellow at the Allender Center. Jay lives in New York City with his wife and two children. To learn more about Jay visit his website at www.jay-stringer.com.